The Ultimate Under-Lizard: Rango and the State of Animation 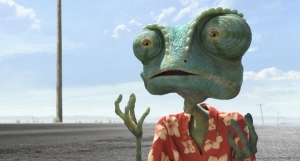 Ever since the Academy introduced the Best Animated Feature category in 2001 eighty percent of the winners have out-grossed the Best Picture victor of the same year. The only exceptions are Finding Nemo, which was second at the box-office to the franchise juggernaut The Lord of the Rings: Return of the King, and Spirited Away, which out-grossed Chicago only internationally. Even Wallace and Gromit: The Curse of the Were-Rabbit was more profitable than Crash. These dual achievements—critical and commercial—of animated features over the last ten years have been split between Disney/Pixar and DreamWorks, as each company has collectively taken home the statuette eighty percent of the time. The success of Disney/Pixar and DreamWorks has persuaded major and minor studios, such as Sony Pictures, Columbia, and 20th Century Fox, to heighten their efforts in the lucrative cartoon rat race. However, only 20th Century Fox, with its Ice Age franchise, has been able to challenge Disney/Pixar and DreamWorks’ animation oligopoly. This collective supremacy over animation is maintained by a visual and narrative model or archetype that rarely fails.

A central facet to each narrative model is the transformation of conventionally unappealing creatures to enduring protagonists, such as ogres, monsters in closets, automobiles, rats, post-apocalyptic robots and cranky old men. These characters and the spaces they inhabit are designed to appeal to family units, with the intention of capitalizing on multiple admissions. The emotional tone of these models effectively straddles a thin line between wholesome humour and heartfelt drama. Every digitized or illustrated detail is meant to encourage audiences to laugh, cry and say “awwwwww” on cue. By examining Disney/Pixar and DreamWorks’ critical and commercial success we can see that this model of persuasion clearly works. However, as valuable as this model is, it is slowly becoming overused. This ubiquity is evident in the current and up coming stream of animated sequels, such as Toy Story 3, Kung Fu Panda 2 and Cars 2. Fleeting are the years when animated films, such as Monsters Inc. and The Incredibles, acted as Hollywood’s only guiding light in an originality-absent Dark Age where remakes, sequels and prequels reigned supreme. With Disney/Pixar and DreamWorks’ current lack of vision a truly unconventional underdog, or underlizard, has surfaced in Nickelodeon and ILM’s (George Lucas’ Industrial Light and Magic) Rango, as its visual style and narrative trajectory refreshingly defies the ruling archetype.

The film follows a chameleon named Rango (voiced by Johnny Depp) who ironically struggles to blend into his surroundings after his aquarium falls from the backseat of a moving car onto a desert highway. When detached from his safe sanctuary Rango wanders the Western landscape self reflectively questioning his role in the greater narrative. Is he a charismatic hero? Or a daring romantic? The dimensions of Rango’s character are slowly revealed when challenged by a menacing hawk, a gun slinging rattlesnake (voiced by Bill Nighy) and a Noah Cross-like tortoise (voiced by Ned Beatty). Like the prototypical Western the protagonist’s moral fiber is tested in a rundown rural setting full of burdened citizens awaiting a hero.

Unlike Disney/Pixar’s recent offerings, such as Wall-E or Up, Verbinski refuses to turn the film’s hero into an unconventionally adorable figure. Instead, Rango is visually unappealing, with his large gut, misshapen eyes, frail structure and crooked neck. This refreshing lack of cuteness reflects Verbinski’s overall intentions to treat the film’s viewers, whether they are children or adults, with more regard than usually given. This resistance towards Disney/Pixar and DreamWorks’ charm is also evident in the film’s narratively isolating introduction. For instance, in the past Disney/Pixar films have established narrative tone prior to the film’s opening credits with Hollywood variations of experimental shorts. These shorts come before Up, with Ted Newton’s Day and Night, and Wall-E, with Doug Sweetland’s Presto. Verbinski’s opening sequence, in which Rango directly interacts with the audience during a prolonged comedic monologue, is instead used to incorporate the elements of an experimental short into the actual feature.  These experimental components also seep into the film’s core by means of surrealistic dream/hallucination sequences. This use of a self-reflective hero and dream sequences demonstrate Verbinski’s defiance of Disney/Pixar and DreamWorks’ model, as the film’s narrative techniques refuse to pander to an increasingly younger (pre-teen) audience who regretfully has dictated popular culture for the last five years.

Other ways Verbinski rejects the Disney/Pixar and DreamWorks model include his refusal to “dumb down” the film’s humour, his avoidance of 3-D technology, and his constant referencing of classic genre-shaping Westerns. First, the film’s humour is at times slapstick, at times dark, and at times whimsical, yet it is never infantile, like DreamWorks’ erroneously praised Despicable Me. Rango’s humour feels as though it was highly influenced by Depp and does not implicitly cue laughter.  Instead, its gags are not guaranteed, thus promoting more sporadic and individualized amusement. Second, Verbinski bold dismissal of 3-D technologies concentrates the audience’s attention on the strength of ILM’s visual images and their more classical depth of field. Instead of generating dimensions through a highly popular gimmick Verbinski and ILM construct intricate shots and scenes that give audiences visual options. For instance, in the film’s thrilling chase sequence in which hordes of moles riding bats pursue Rango there is a seemingly endless amount of action to survey. This action is also not for action’s sake, as it shapes the characters involved in the sequence through humouristic absurdity, thus adding to the narrative’s arc. The third means by which Verbinski rejects the ruling model of animation is through overt and covert referencing. This allusion to past Westerns is constant, and dissimilar to Shrek’s relentless referencing of fairy tales because Verbinski is not concerned with whether audiences recognize the genre’s signifiers or not. The most obvious of these allusions, however, is in Rango’s mirage-like encounter with the Spirit of the West (voiced by Timothy Olyphant) or embodiment of the ideal Western hero—Clint Eastwood.

The film is not flawless, but unlike the films that exemplify the Disney/Pixar and DreamWorks model it is not intended to be.  Its visual and narrative dismissal of what animated films have become makes Rango a revitalizing animated feature, a well-informed Western, and an out of the ordinary textual and contextual tale of a triumphant outsider.

This entry was posted in Critical Analysis and tagged Academy Awards, Animation, Western. Bookmark the permalink.

2 responses to “The Ultimate Under-Lizard: Rango and the State of Animation”