Gramps: I Saw the Devil & He Smiled At Me

How does one take revenge on a preying psychopath unable to feel pain or fear? In this case, what’s the most potent revenge the prey can suffer beyond death, which is a welcomed release? When the victim hunts the prey, who’s now in control of vengeance? The victim is obviously still tormented by his trauma, and the prey only suffers physical pain since he is emotionally dead. So, the most potent revenge? It’s when vengeance itself wins, destroying both victim and prey: the victim lives, yet without gain; the prey dies devoid of psychological pain. It’s the proceeding generations however (the prey’s family in this case) that ensures continual suffering after death—echoes of revenge passed from one generation to the next. Thus, said revenge creates/continues psychological unrest for all parties involved.

The prey, Kyung Chul (Min-sik Choi, of 03’s Oldboy fame), desecrates a string of female victims until he murders the daughter of a retired police officer; unfortunately for Kyung, her boyfriend just so happens to be a Special Ops Agent, Kim Soo-hyeon (Byung-hun Lee). Ladies and Gentleman, let the shitstorm begin. I Saw the Devil examines exactly what constitutes revenge and if it has a limit; are there such horrors that cross the lines of vengeance into, say, re-revenge? Yes, that is not a word, but there is no other way to describe the carnival of terrors these two men (Kyung and Kim) inflict on each other. They’d be lucky if they did, indeed, see the devil. 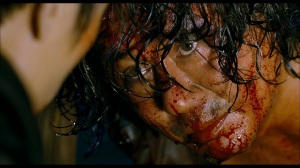 Kim beats the unholy hell out of Kyung

Now we’re cooking with fire! If that intro doesn’t make you want to watch Devil then (a) you have no pulse (b) you get motion sickness easily or (c) there’s a re-run of Glee on the tube. Plus, there’s always the Disney Channel or PBS (not that there’s anything wrong with that). Actually, I’m no hater; I speak highly of the film’s premise, but I Saw The Devil is far from being top-tier revenge material. Granted, the basis is sick, twisted, complicated, and devastating; but its execution is… executed poorly? (my apologies for trying to make a play on words at 8am). Anyway, back to business: the plot. It’s sort of like the back of your shampoo bottle in terms of its instructions; to clarify, if Devil were a novel in the newly created “Shampoo Genre” at least 3-4 chapters would be called, “lather, rinse, repeat; lather, rinse, repeat, repeat, repeat.” I understand the idea of wanting someone to suffer until their last breath (because Kill Bill told me so), but Christ boys,[i] throw something into the revegi-cycle: a kidnapping, followed by a savage beating, then the release of prey/victim. Again, a kidnapping, thrown in with a tad of savage stabbing (see, some differential), and releasing the silly bastard back into the streets knowing that in a matter of days Kyung or Kim are coming back with capital ‘A’ vengeance. Is it because this time, unlike last time, it’s personal? When is revenge not personal? Make up your minds fellas; there comes a point where it seems both men have lost sight of the origin of their revenge and are bludgeoning themselves with dull objects, cutting tendons, or strangling each other simply because it’s a new day of the week.

I’m no expert (in anything really), but perhaps Kim could stop off for coffee and shoot the shit with the locals about the recent string of murders? No, better yet, he could hop on in to the local pub and bitch to the bartender about Kyung after a few jam-jars of draft? I know, I know, he’s the stoic anti-hero; a few words wouldn’t hurt his character’s image though. Also, instead of kidnapping and rapping women, Kyung might assert his skills against an opponent of equal apeshit insanity instead of a busload of school kids in order to ‘perfect his craft?’ Sure, disposing of kids is psychologically demented, but if Kyung took down the ‘Korean Liam Neeson,’ would you not be impressed? Plus, it adds to his credibility at the same time! Despite the gore, bloodshed, and fantastic acting, I’m afraid to admit that the ‘cat-n-mouse’ game gets tedious around the one hour mark.

I knew I should have fought Liam Neeson...

Let me travel Memory Lane for a moment, if you will: I severely loved Oldboy. Thus, I love Min-sik Choi (A + B = C, no?). I’m a simple man and, thus, the single-take fight scene in the hallway is, and forever will be, burnt into my brain, equated with brilliant choreography and intense physical demand. As for Byung-hun Lee? He’s a relative newcomer to North America’s ‘A List’. He’s the ‘Korean Brad Pitt.’ Seriously, that was in the press releases for The Good, the Bad, and the Weird (2008). Obviously, since Mr. Byung-hun is associated with the western genre, I’m a fan of his. I also have an equation for such these matters: (western + above average storyline – love story = All That is Man). The equation is a little rough, but if you think on it for a minute, it’s pretty true, while—of course—not taking into account the ‘Old Boys’ of western lore like Wayne, Scott, Stewart, and MacRae. The point of this rant? The cast is truly exceptional, to the point where I want to see these two men paired together for life (not that there’s anything wrong with that). Moreover, whoever played the retired police detective (either Gook hwan Jeon or Ho-jin Jean) should get his own movie immediately. He’s the ‘Korean James Coburn or Lee Marvin’ (my copyright) in terms of the old-school screen presence that he brings to Devil. Again, for anyone who missed it, the cast is exceptional.

All-in-all, I can’t help think of what could have been. With such a thought-provoking premise, I feel more subtlety would have greatly increased the audience’s relation to both the antagonist’s and protagonist’s deep-rooted suffering. More is not always better.

[i] “Boys” is a term you will see often in my writing. In this instance, it means the people accountable for the creative control of the film. In general, however, I use it to group people together (not excluding females—I’ll work on my gender neutrality), in order to praise or dump on them. For example, “the boys and I went on a tear last night” = Good; but, “Jesus boys, get your act together” = Bad. Ironic moment? Both lines will probably be used within minutes of each other.

2 responses to “Gramps: I Saw the Devil & He Smiled At Me”