Open on a wide-shot of a samurai performing public Hari-Kiri in front of his Lord’s residence as a form of rebellion against said evil, sadistic Lord Naritsugu. My initial thought? “Oh, Christ, this is going to be gruesome.” As I was about to flinch, squirm, and turn away, however, something amazing happened. Takashi Miike, the same Miike that directed a scene where a man is hung by his skin with fish-hooks as he’s tortured, focused on the struggling samurai’s face throughout the entire action: stabbing, slicing, twisting, disembowelment. I may be typecasting Miike here, but I thought that, perhaps, those might be his four favorite words. The opening scene tells us that this is not a regular offering from the uber-violent Miike. Dare I say it? I shall. It looks like we have ourselves a “classic” samurai film in the Year of Our Lord 2011.

It’s the film’s premise that intrigues after an initial viewing. Feudal Japan is enjoying an era of peace and stability, aside from the Shogun’s younger brother (Lord Naritsugu). Thus, the current generation of samurai have not known battle as their elders have, nor are they as skilled as the previous generation who would have fought for the current era of peace. The skill of samurai nationwide is waining. It is, perhaps, the ronin that are the most skilled swordsmen of their age, as they earn essential food and drink by their sword, daily. Is it possible that a band of elder samurai and ronin followers could take down their own Lord and his guard of over 70 samurai warriors? This is the question that 13 Assassins answers through its nostalgic look at blood-soaked loyalties and complex questions of whether strict honor can exist while living under a sadistic tyrant.

It’s hard not to make comparisons to past films that thematically drench themselves in loyalty, honor, and nostalgia. I know we like to shit on reviews that make one-off mentions of other films for comparison but, fuck it, I’m doing it to hopefully create a mythical sense of bravado in the reader in order to see 13 Assassins. Miike’s film is a remake of a 1963 picture of the same name, so that places the original 13 Assassins about a decade after one of my comparisons and close to seven years before the other: Seven Samurai (1954) and The Wild Bunch (1969).

Like Kurosawa’s classic depiction of ronin mercenaries protecting a small village from bandits and modernity, Miike’s film also begins with an event that leads to the recruiting of swordsmen. The difference being, of course, Miike’s brutally haunting imagery of incidents leading to said recruitment (hey, I said he was more tame than his previous films, not dead!). In both films there is a mixture of generations brought together as a group of outcasts or soon-to-be outcasts, first bound by money (Samurai) or sense of duty (Assassins) before unifying as one, indiscriminate of age or class. Respect solidifies the men underneath the samurai garb, as is proved by the acquisition of the 13th assassin. With such a connection between these 13 men, it’s as if Miike is questioning the samurai’s elite social status earned by blindly serving whomever is in power at a certain time and place. No doubt there are things worth dying for, but one must decide for oneself what is or is not worthy of self-sacrifice; as dying merely out of duty in the hands of corruption is, on one hand, part of a samurai’s code but, on the other, possibly the reason for their extinction. Time is the ultimate assassin. 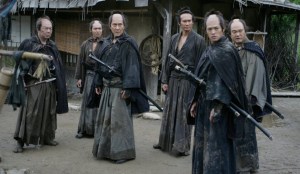 Pike: “He gave his word.” Dutch: “He gave his word to a railroad.” Pike: “It’s his word!” Dutch: “That ain’t what counts! It’s who you give it to!” You’re goddamn right boys; the philosophy of Sam Peckinpah channeled through the mouths of Holden and Borgnine. Beautiful. It’s the proceeding moral dilemma that best sums up the conflict behind 13 Assassins. When does a man put his social label(s) aside and, simply, be a man of conscience? Miike’s “wild bunch” find their self-awareness quite a bit earlier than the insignificant wanderers in Peckinpah’s saga. Both paths, however, intersect at the same destination: “Total Massacre” (a sign held by Shinza, the leader of the assassins, that was written by one of Lord Naritsugu’s victims). It’s the final act of Assassins that adds a modern twist on the age-old sacrificial tale, as Miike and crew employ cunning creativity while enacting the final battle scenes, not only in the swordplay, but in the cat-and-mouse strategy employed by the fearless assassins. What plays out is the most intense and entertaining fight scenes in recent memory, combining old-school swordplay against modern arms and a tinge of … ohhh … John Rambo?

To simply think, especially in our time of disses (honor, loyalty, respect), that men used to live and breath this lifestyle is, well, enough to make the Tin Man swell with emotion. Miike’s restrained visuals and sincere, honest storytelling cuts through the bullshit that destroys most films now-a-days. I know this is set in Feudal Japan, but it’s a breath of fresh fucking air compared to the shit we’re constantly forced to swallow socially and cinematically. In one film, Miike has redefined himself and matured one-hundred fold. I feel it’s a special event when I see a film that has the balls to do as it wants and say what it says, all while retaining its authenticity.

“Cult director Takeshi Miike delivers a bravado period action film set at the end of Japan’s feudal era in which a group of unemployed samurai are enlisted to bring down a sadistic lord and prevent him from ascending to the throne and plunging the country into a war-torn future.”