Gramps: Carpenter is The Prince of Darkness

John Carpenter. Jesus Christ. John Carpenter. Jesus Christ. J.C./J.C.? The initials are not a coincidence in the cinematic world of the macabre and stories of le diaboliques! Carpenter is a Man Amongst Men in independent, brilliantly told cinema. With Prince being his first “indie” after going full studio treatment for Escape from New York, it’s like he’d been saving all his good ideas that he couldn’t use with the studios and unleashed them, figuratively and literally, in this film.

First and foremost, I want to emphasis how fawkin’ good the story is here! I don’t even want to talk about atmosphere, terror, effects, or soundtrack, because those are all Carpenter staples and are, again, exuberantly excellently executed. So, I ask you to question: what if The Bible was just a myth and not really “the truth?” HERESY say the Christians!! I ask, what if this myth was to cover up the real truth of how the Earth came to be? BLASPHEM say the churchgoers!! Finally, oh yes… I ask… what if God (a God, Allah, Buddha, Johnny Cash) was not the ultimate creator, but, instead, there was an Anti-God that was responsible for our modern civilization? LIKE FUCK say the Bishops!! Well, that’s what Johnny Carps deals us here, pure evil bliss.

And, boys and girls, we’re not talking Satan either; Satan is too much of a Momma’s Boy for Johnny C; Satan is the Philly Light of cream-cheese. This is pure 100% EVIL we’re dealing with – the exact opposite of God. Here’s the question that gets you shot in Wal-Mart: “What if the Anti-God is, in fact, the God mankind thought they knew and continually prayed to?” (I’ll pause for a mind-blowing sound effect of some sort). 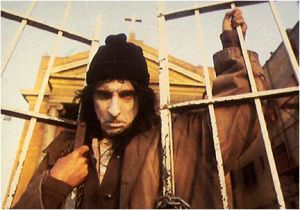 Alright. Well, the answers to all those Philosophy 101 questions are basically the equivalent to… oh?… shit hitting the fan; yes, as a matter of fact, it gets quite messy. Not only does Evil exist, but he/it left a son on Earth. Since the dawn of time, this vile seed has been hidden from all mankind by a secret Christian Clan. What we’re introduced to as the film opens, however, is the last member of this mysterious clan dying alone in a semi-abandoned church. On his chest, is a chest (oh snap!) which holds a key. Your key, yes you, is to find this G.D. DVD and unlock it into your DVD player immediately. If you love Carpenter, I suggest having a roll of Kleenex nearby… Crazy good.

*IMDB Synopsis: “A research team finds a mysterious cylinder in a deserted church. If opened, it could mean the end of the world.”