Boxing movies. What are you thinking right now? Yes, yes, the Rocky Franchise; perhaps the recent success of The Fighter? For me, with unabashed passion and extreme stubbornness, it is and always will be Raging Bull (a heavyweight contender for Grampenstein’s favorite film). Enter Requiem For a Heavyweight… almost 50 years ago! Talk about “where have you been all my life?” Watch out Rocko and Ward, because “Mountain” Rivera could give Jake La Motta all 12 rounds on any given sunday.

Simply run down the cast: Anthony Quinn as the faded heavyweight Louis Rivera; Jackie Gleason as his sketchy manager Maish; Mickey Rooney as the cut-man named Army; and Julie Harris as a manipulative career counsellor. I feel like I need to say this: I’ve not seen a small cast of characters this engrained in their roles in… who knows how long?! So much so that I’ll remember the actors by the roles they played in Requiem. Gleason will no longer be “Minnesota Fats,” he’s Maish; and Anthony Quinn was never in La Strada as far as my mind works (admittedly, it often works in odd, backward ways). It feels as if Gleason, Rooney, and Quinn trained, fought, and lived together for years before shooting this film. The emotional strain on Army’s face will bring you to tears; Maish’s guilt will eat you alive; Grace’s “concern” and sympathy for Rivera is heartbreaking yet frustrating; and, finally, “Mountain” is a lost boy in a world of underhanded deals and crooks; what’s worse is that there is not even any room left for him in this “asshole of the universe” world. Where’s he to go? 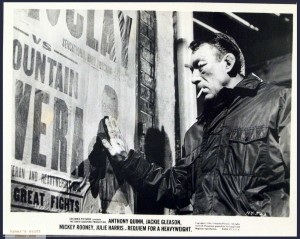 As you may have guessed by now, it’s the relationships that drive this film, and boxing is just the backdrop. Actually, there is only one fight scene and, unfortunately, it’s the weakest scene in the film. Shot from Rivera’s perspective, it’s a barrage of jabs, crosses, and hooks; shaky movement; fades; spins; blurs; and, finally, a 10 count from the canvas’ perspective. However! There is a “holy shit” moment that redeemed the dated fight scene: the announcer keeps mentioning “Clay vs. Mountain,” but from the dizzying camerawork it’s unclear whether it is Cassius Clay or not. You think: it can’t be THE Cassius Clay, until, BAM, a crystal-clear closeup of Mr. Ali himself as he pays his respects to the downed “Mountain.” Holy shit indeed; that’s a bit of history right there folks. Also, I might as well ruin it: Jack Dempsey has a cameo later in the film.

Requiem is shot in the vein of Noir films of the past; the light between the ropes casts fluid flickers of light/darkness against the crowd; the locker rooms and backstage areas are cloaked in darkness, almost covering the underworld characters waiting for Maish, Rivera, and Army; and the streets, oh the marvelous streets!, how they are shot with such beauty! The back alleys, garbage filled gutters, and rain soaked pavement of New York City never looked so good in striking black and white. Honestly, any DVD screen capture of this film could easily hang alongside the finest of the fine photographs I’ve seen (I’m not pretending to have seen, created, and cried over all ‘art,’ nor would I want to, but, fuck me, this film is beautiful).

Coming back to the relationships (the heart of the film) besides Army’s loyalty and love for Rivera, it’s hard to place Maish’s and Grace’s feelings toward “Mountain.” Rivera is a gorilla, yet he’s a child–a child who only knows how to do one thing, and that one thing is taken away from him for fear of serious injury. He was raised a boxer and continues to live as one even after forced retirement, frequenting the local bar where all the failed boxers congregate (called “the Graveyard”). The only person who really understands him is Army, a former boxer turned cut-man. The scenes between Rivera and Grace are agonizingly painful, as Rivera has never known a woman, acting like a 5 year old at Christmas; yet, a 5 year old that could snap into a state of anger and violence at anytime (he seems disillusioned and still connected to his glory days). Grace? She obviously sees more in Rivera than a discarded boxer, yet is there anything romantic to their relationship or is it as Maish says: she simply feels sorry for him and is giving him the wrong idea that a beautiful woman like her could fall in love with a “Mountain” of a man like Rivera.

This brings us to Maish; yes, he’s trash, but is he a “realist” trashy arsehole at least? He tells Grace that “you think when you put clothes on an ape you make him a dancing partner;” and, as sad as it is to say, he’s partially right, as Rivera has zero social conditioning–violence was/is his way of life. There is one thing for certain, Maish’s actions are deplorable, but is there anyway the audience can retain an ounce of sympathy for him? Watch his eyes when he tells Grace not to lead Rivera on, it’s as if it breaks his heart as much as it does hers; not only will Rivera not find love, but he’ll not even miss it as he has not developed to the point where he could even grasp love’s fundamentals. For Rivera, love, like everything else, is equated with roughness and force. It worked in the ring, so why wouldn’t it work with a woman? His inner-conflict meshed with the external is enormous: the gentle giant whose life has been stripped from him, trying to make it in a world where no one cares and everyone takes advantage.

Devastating. A one word summery.

*IMDB Synopsis: “Mountain Rivera is at the end of his boxing career after a knockout by Cassius Clay in the seventh round. His left eye is one punch from permanent trauma, his ears turned to cauliflower, his speech slurred from “being hit a million times,” and he slings punches anytime he hears a bell, but his trainer and ‘cutman’ Army, and Miss Miller, a manipulative social worker, support his illusion that he could be a movie usher, a camp counselor, or a romantic partner for Miller. But his manager Maish Rennick, knowing the truth, can’t admit that he’s bet everything he had that Rivera wouldn’t go four rounds against Clay. Maish will pay with his life when the goon squad comes to collect if he can’t persuade Rivera to abandon his pride (“I fought 111 fights and never took a dive”) and agree to a wrestling contract of which he’s ashamed. When Maish blurts out his secret, Rivera realizes that walking out on the deal is not an option…”