Gramps: Our Man Flint More Like Our Oldman Flint 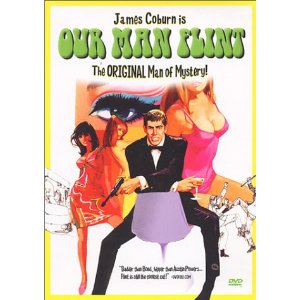 Our Man Flint is a tough flick to discuss after viewing the Austin Powers franchise, as there is a massive age gap between my generation (not that I’m a big fan of my generation) and that of oldman Flint that makes it appear dated. Flint is a spoof of the Bond series, no way around that; there is even a moment in the film when the beautiful villain tosses aside a book called “Adventures of 008,” claims that it’s foolish to print such nonesnse. Thus, throughout the film I caught myself reliving other spy spoof films (and, of course, Roger Moore’s ridiculous 007), which took away from Flint’s wild and, at the time of release, original sets, wacky gagets, and terribly choreographed kung-fu (karate chop!).

What combats the datedness? The great James Coburn of course! Coburn is a man that defies generations, as he’s as charismatic, masculine, and smooth whether he’s saving the world from super-villains or hunting down Kris Kristofferson (as Billy the Kid) for Sam Peckinpah. As Flint, his smug arrogance and never-wrong attitude make Coburn  an excellent choice for the super spy, super sly Derek Flint. There is, on the other hand, his kung-fu skills. Oh my lord! It’s no secret that Coburn took lessons from Bruce Lee, but he sure didn’t take choreography lessons.

On a side note, that I’m not going to get into, Lee J Cobb looks like a younger William Holden. Take that for what it’s worth…

The indoor sets are immaculately constructed, loking as if a kylidoscope exploded onto the walls, floors, and ceilings. It’s prime-time 60s psychodelic fun! In fact, the “pleasure unit” training centre inside the evil headquarters may cause blindness due to spinning neons and florescent brights (beware). The model work is impressive for the time as well. Volcanos explode, damns collapse, glaciers shatter, and it all looks and feels genuine. In fact, besides the super trippy psychodelic interiors, I was amazed at how detailed and elaborate the set design was, thinking that the producers put a boatload of cash into the film.

And now ladies and gentlemen, on to the… ladies. That Coburn is one lucky dude. When it comes to Derek Flint, poligomy is the key! 4+1=5, no? Plus, they wait on him hand-and-foot! The man has a personal shaver and woredrobe lady; I’d love to know what the other three do (and it would probably make me seriously jealous). In some 60s flicks, the ladies clothing is not that riske, but that’s not good enough for our man Flint. There’s not much clothing on these beauties at times and, combined with the settings, visual overload is inevitable and satisfying at the same time.

Although the film is over the top in everything it does, however, that applies to its lulls too. There is quite a large amount of “build up” exposition and details between the grande settings, beautiful women, and Coburnian charm. Sadly, it’s just not entertaining enough to maintain one’s attention (mine specifically) as the plot drags and the gags lag, showing their datedness as, thus, we’ve seen it all before.

One response to “Gramps: Our Man Flint More Like Our Oldman Flint”