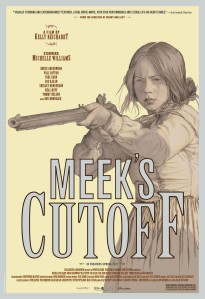 For every handful of reviews I’ve skimmed, the word “minimalist” is predominately displayed. Minimalist dialogue, visuals, narrative, etc. I’m afraid that I’ll need a definition for “minimalist” (straight from the Oxford English Dictionary no less) before I assign such a label to Meek’s maximal beauty. The narrative is simple, granted: “Settlers traveling through the Oregon desert in 1845 find themselves stranded in harsh conditions” (IMDB) and, honestly, that’s about the gist of it. Yet, it’s a historical event. There was a Stephen Meek; he lead emigrants through Oregon by way of a trail that would be named after him; and he was not the most well-liked, trusted, or friendly of folk. Disregarding the whole history of Meek’s trail, the film begins in ’45 when emerging settlers already came to suspect Meek’s abilities, or lack thereof. The trail is rough, water is near non-existent, fear of Natives run high, and the piety of the settlers clashes against Meek’s survivalist strategies.

Beginning with the cast, Meek’s Cutoff’s leads are almost unrecognizable in their plain-clothes, yet deliver performances so believable that they border on “real” – employing sparse dialogue, yet speaking through mannerisms. Michelle Williams, the easiest to recognize, plays Emily Thetherow, alongside her partner Soloman Tetherow (played, as always, by ever reliable Will Patton). The Thetherows, say, are the “leaders of the pack” of emigrants, that includes Paul Dano as the passive, timid Thomas Gately, and Shirley Henderson as Glory White – the stereotypical frightened pioneer, one who sees the land as Ungodly and the Natives as savages.

However, despite the aforementioned talent, it’s the, near completely, unrecognizable Bruce Greenwood, and Western character actor Rod Rondeaux (as The Indian) who raise Meek’s Cutoff beyond the genre into something more mystical? Philosophical? Religious? As my Bearded friend mentioned in his review of Kill List, great genre pieces overcome limitations – exposing contemporary issues – all within the guise of a genre; and, thus, leave the viewer obsessed, reliving the previous 104 minutes (as in Meek’s). In this case, it’s no different, as Meek’s leaves far more questions than answers when the credits roll  (unless one were to read Terrible Trail: The Meek’s Cutoff by Clark and Tiller). I, myself, prefer ambiguity to actuality, rendering Meek’s Cutoff endless re-watchable.

“You’ve mentioned Greenwood and Rondeaux, Gramps, but what’s the big deal?” Well, my dual personality, let me tell you. First off, please forgive me, but it’s hard not to read religious symbolism into the film or, perhaps, spiritual is the more apt term. A group of wandering Puritans (guessing from  their names and dress) drudge through the desert in search of a new beginning in The Dalles, Oregon. Two of the men are named Solomon (as in Solomon the Builder, the wise King of Israel, whose amassed following and power led to sin and, eventually, a divided kingdom – a better reference to the United State’s birth I cannot think of). Meek, their guide (potential savior), is a lying sinner, boasting of his skills in hunting, tracking and, well, murdering Indians. Meek is no animal; he is simply the land – the harsh, unforgiving Eastern Oregon outback. In contrast stands The Indian (yes, that’s his name), who shows no signs of harm besides being seen – his unfamiliar dress and foreign language allow Meek to label him an “other” and a “murder” to which the pious followers actively believe. The Indian, however,  is quite passive, holding no ill-will toward his captures; it’s only Meek’s (suspect) words that make him appear otherwise. The Indian is the unknown, the skies, soul, spirit – what have you – and his guidance leads Meek and crew to best potential area to find water (anything further is a spoiler). In Meek’s Cutoff, I believe no one to be free of sin – even if that sin is not shown or is yet to be committed – “yet to be committed” holding the key to the film’s ambiguity. 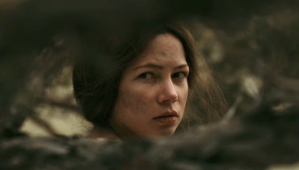 The main question in Meek’s Cutoff is as old as the human condition itself: can one trust a human-being of a different culture and race? Is one willing to follow the familiar into possible ruin or even death, rather than look beyond skin, race, or language? Chew on that for a while and, continue chewing, as Meek’s Cutoff allows no answers.

Before leaving you to ponder the wonders of good vs. evil [and as I gave a devilish grin], simply, there is no Meek’s Cutoff without the photography of Chris Blauvelt. This is where I would use the term “minimal,” as night-shooting is often illuminated by a single lantern or firelight, casting full character silhouettes, half faces, tent corners, and other wondrous battles between light and dark. The day scenes, the panoramic shots in particular, I credit to both Blauvelt and Mother Nature, as there is nothing half so breathtaking as natural landscapes – layering land, mountains, sky, and clouds. In terms of Blauvelt, it’s astounding how he brings life to such dim, dull colors; as the travelers’ brown tents, the males’ simple black and white garb, and dusty covered wagons leap off the screen from, seemingly, the exact color of the Oregon desert – a dusty, sandy brown. It’s the women’s clothing, however, that defy one’s visual understanding, capturing the subtlest of pinks, reds, and other “bright” colors regardless of background or foreground, sky blue, pure white, or sandy brown.

Meek’s Cutoff is far from minimal; in fact, it’s one of the more intelligent, visually stimulating, and well-paced films of the year. It’s like standing behind a waterfall: reflecting on the water’s continual, even-flow, while it captures, distorts, and reflects all the beauties of the lands the lay beyond.

*Synopsis: “The year is 1845, the earliest days of the Oregon Trail, and a wagon team of three families has hired the mountain man Stephen Meek to guide them over the Cascade Mountains. Claiming to know a short cut, Meek leads the group on an unmarked path across the high plain desert, only to become lost in the dry rock and sage. Over the coming days, the emigrants must face the scourges of hunger, thirst and their own lack of faith in each other’s instincts for survival. When a Native American wanderer crosses their path, the emigrants are torn between their trust in a guide who has proven himself unreliable and a man who has always been seen as the natural enemy.” – Oscilloscope