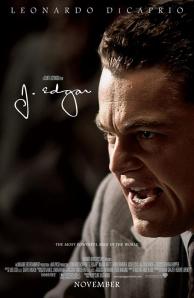 First of all I must clear the air: I’m a Clint Eastwood fan. No. I’m sorry. I worship the ground the man walks on. No, no, again, sorry. Hmm? Okay. I’ve seen Changeling twice. I know, I know. Crazy right? Well, with that out of the way, I can get to my main question after having the pleasure of seeing J. Edgar: What up with all the negative criticism Inter-Web? “Eastwood’s portrayal of Hoover is too sentimental.” “The make-up ruins the movie.” “The time shifts are too frequent and cause me to lose interest.” “My seat at the theater was too hard.” Bah-Humbug to the works of ya! Is it a masterpiece alongside Letters From Iwo Jima? No. Is it a great film with a few nagging issues? I believe so. So, without further ado, let’s get into ‘er.

What I saw was a beautifully shot and directed film with a riveting subject matter. I’m Canadian and knew nothing about Hoover beside the usual ‘he wore a dress and liked men’ subheading nailed to his name. After seeing the film, however, and how Hoover’s life was so intwined with American history, I find myself continually reading about the man. The film is an conduit to history (now if only I’d learn something about Canadian history).

Returning to my jape of Changeling above, J. Edgar is shot with meticulous, ridiculous detail. The cinematography is the time period it depicts. I don’t know how else to put it. From the brownish hued interiors of The Bureau to the Noirish lighting of the Red’s propaganda producing hidout, the look and feel of the imagary is as important as any line of dialogue or any action taken by Hoover himself. That may seem a bit extreme since the film is heavily dialogue driven, yet the only way to see J. Edgar is on the big screen due to the luscious visuals.

As far as ‘Make-up-Gate’ is concerned, yes it could have been better; but it is not bad enough to taint the overall impact of the film. The film’s aging of DiCaprio and Watts is well done; it’s only the look of Armie Hammer (as Clyde Tolson) that is questionable, and I say “questionable” because I feel part of elder Tolson’s ‘facial-failure’ is due to Hammer’s inability to create a convincing old man. First off, the f*cker’s too young and handsome! There, I said it. Even alongside Leo during the 1920s era, all he needs is a halo to be angelic. Thus, Hammer just does not work as an old bastard. Simple. 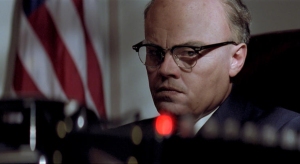 “The film shifts time too often.” Really? I felt the transitions may have been a tad too smooth as Eastwood frames the narrative quite conventionally by way of Hoover dictating The Bureau’s past to a typewritist. Further, the transitional images are linked by voiceover. There are a few instances when there are no ‘helping hands’ between the 20s and the 60s, but those are my favorite time shifts (a little mystery and well, thought, go along way in a historical bio-pic). It’s not as if Hoover calls Bobby Kennedy to tell him of his brother’s assassination and the film cuts back to 1919 showing Hoover taking a dump and reading the newspaper.

What I want to harp on is the issue of sentimentality. It’s clear from the film that Hoover was not the most likable fellow at the town dance, yet Eastwood isn’t afraid to show Hoover’s human side. Wonder why? Afterall, Hoover was a human being. 1 + 1 = 2, no? I’m in my infancy of Hoover history, so the claims of how monstrous he was is not for me to debate. What I can add to the criticism is that the measure of one’s humanity isn’t a football game measured by points or wins and loses; it’s not one-sided. A uniting factor in humanity is shared experience. Who cannot relate to losing a loved one or the premise of unfulfilled love? I’m not jumping into bed with ole J. Eds, I’m just saying that Eastwood balances the man’s evils with his human weaknesses.

Stepping out of ‘Eastwood Idolization Mode,’ there are plenty of things to criticize which is a reason the film does not have that ‘I’ve just had my world rocked by cinematic mastery’ feeling. The roles of Kennedy, Nixon, and other historical figures are more charicatures than characters, removing them from the historical feel of the film. Again, Hammer might not have been the best choice for Tolson. The make-up can be shoddy (remembering Eastwood brought the film into Warner Bros. for about 35 million – Immortals cost 75 mil).  I’d suggest seeing the film with an open mind or, rather, a clean slate from current criticisms. Sure it can be picked apart, but why ruin a good film by a great filmmaker? Enjoy. Eat, drink, and be merry.